Having finished this journey around north London in 2011 I pondered about what to do with this project next. The idea of an ebook came to mind and I have just finished it.

I have expanded the original blog so if you enjoyed that you might really like this book. The drawings are bigger so you can appreciate them even more and you can save it to your laptop or tablet. It is saved as a pdf so the text won't expand as it would on a kindle reader.

You can download the book from my website here: please feel free to share it among your family and friends. If you've enjoyed reading this book I would love to read your comments in the box below.
Posted by Heather James at 14:27 No comments:

Labels: Pen and ink drawings, the route of the old North London Line

My trip across the Thames by ferry

I began my 'Drawing my way round London' project with a sketch of the Woolwich Ferry. I can remember being spellbound with the view of the ferries travelling to and fro across the river and I made a note to myself to make a trip on it one day and nearly eight years later I finally did.

Little did I know back in 2005 that the North London Line would be closing for good a year later. So returning there a couple of days ago was a bit of a shock. The station buildings are shuttered up and look very small and Victorian next to the gigantic Crossrail project that has sprouted up next to it.

There are building works everywhere nearby but I finally managed to make my way to the queue for the ferry. Years ago I proved to be a useless sailor on the one occasion I spent a weekend on a yacht but I do get a buzz from travelling on ferries because it feels like an adventure and I enjoy looking at yachts from a safe distance (like on shore).

All the freight vehicles and cars stay on deck and the passengers go below. There may have been about a dozen of us on foot but there was probably enough space for at least a 100 or more people. It felt quite eerie with so much space for so few people. The clanking sounds were impressive as was the gloomy light. All too soon it was over and we had to disembark.

My plan was to find a spot to do a sketch looking back to the north bank. Here I was trying out a combination of watercolour paint and Inktense pencils which are water soluble. I also had the treat of watching a very large, two masted yacht sail past while I worked.

My outing finished with a walk through the Woolwich Foot tunnel back to the north bank of the river. Like the Greenwich Foot tunnel it goes under the Thames but unlike the Greenwich tunnel, which is quite popular, I was the only person using it so I only had my over active imagination and the sounds of my own footsteps for company. I was very relieved when I finally climbed up the steps on the other side and reached daylight again.

Posted by Heather James at 12:09 No comments: 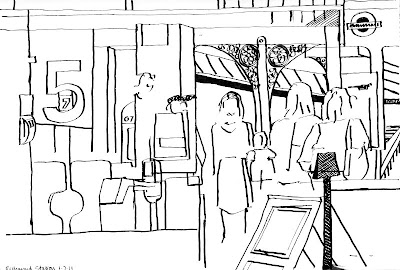 This marks the end of this journey. I'm at Richmond Station and I've attempted, in this pen and ink drawing, to get a feel for the hustle and bustle of people constantly coming and going.

I chose to eat, very slowly, a pasty from the West Cornwall Pasty company for my lunch because they have tables and chairs on the concourse that provided a handy view of the foot traffic. Richmond is a very busy station with various lines beginning and ending there. The station architecture is an odd mish mash of styles from its Victorian beginnings, through 1960s utility, up to the present day with its smooth glass partitions and electronic gates.

I have finally completed this drawing journey which consisted of a series of around 30 short trips which got longer and longer the further west I went. It resulted in 49 drawings, beginning 1 August 2005 and ending 1 July 2011. My confidence in my drawing has developed along the way and I have learned to appreciate equally the drawings that were successful along with the less successful experiments. I enjoyed having you along for the ride too.

There were some high points and low points. One of the high points was drawing in Keat's garden in Hampstead and one of the low points was drawing in West Hampstead when it was so cold I regretted leaving the house and my eyes were watering so much I could hardly see what I was doing. The great thing was that I found if you look hard enough at the most unpromising locations there will always be something worth recording and I am very happy that I undertook this project.

I'll be back soon to announce other plans. See you soon.
Posted by Heather James at 10:06 No comments:

I have arrived in Richmond which means I'm almost at the end of my journey. I was keen to return to a view I have drawn before which overlooks Petersham Meadow from Richmond Hill. I rarely visit this side of London so I felt as though I was on holiday for the day. I don't know my way around the town so finding my way back to this view felt a bit like an adventure.

Richmond is a very wealthy town. It is full of large, gracious houses with fancy cars parked outside. There are boutique hotels along the riverbank and expensive restaurants every which way. It happened to be a lovely sunny day when I visited and that enhanced the general feeling of tranquility and 'everything's all right with the world'. The last time I visited this particular view was back in May 2005 just a few months before I began this whole project so it seems fitting to show you the sketch I made then.

Posted by Heather James at 09:26 No comments: 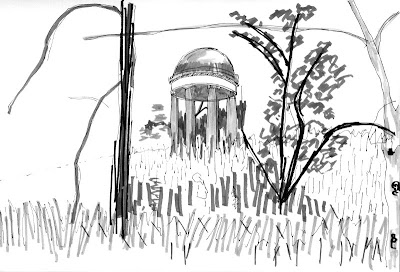 I find it's always a mistake to have a preconceived idea about what you intend to draw and I fell into this trap yesterday.

I had planned to do an elaborate drawing inside the Palm House at Kew but they keep the temperature so hot in there, since it is full of tropical plants, I almost felt my life force drain out of me. It was fascinating exploring the place but I couldn't spend too long in there.

So I had to abandon that idea and mulled over what to do while sitting on a memorial bench outside this giant green house. I was surrounded by other limp looking visitors who seemed to be in need of recuperation as well as me which may explain why there are so many benches outside the Palm House.

So while sitting there I could see in the distance on top of a grassy hillock this temple which looked intriguing. So I wandered over to it via the Waterlilly House where a nice, elderly gent took some time to explain in clear detail the sex lives of waterlillies to us (which were in bloom and looking lovely). There are a few temples dotted around Kew Gardens and this one is called the Temple of Aeolus who was a mythical king of storms and winds.

When I got to a convenient position and began drawing away I was amused by a bunch of young school children who were behaving like the famous five and chasing up and down to the temple playing some game where they were rescuing people from slavery. I managed to draw part of one of these children but it may be difficult to spot.
Posted by Heather James at 11:53 2 comments: 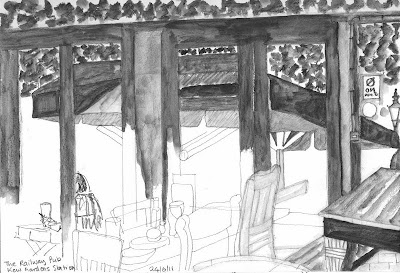 I've reached Kew Gardens now and only have one more station left to visit which will mark the end of my journey. I'm pleased that I'm still enjoying the train ride and recalling the images I've drawn as we pass through each station.

I was very much looking forward to revisiting Kew Gardens. I finally arrived at the station around lunch time so decided to kill two birds with one stone by having lunch in the Railway Pub. When you look at the building from the outside it appears to have been built at the same time as the railway ticket office but I can't imagine what it was used for.

From where I was sitting I could see the station platform to my left with the trains arriving and departing and to my right the busy little cul de sac outside the station with its fancy restaurants, health food shop, book shop, banks and expensive children's clothes shop. I chose a complicated scene to draw and wasn't sure where to start, or to finish, for that matter. The tennis from Wimbledon was showing on the TV in the pub and the commentary was loud enough to be a welcome diversion from my internal dialogue that was grumbling away while I laboured on the drawing. I eventually decided to call it quits around 2.20pm since I also wanted to get into Kew Gardens and do a drawing there too. On reflection I quite like its unfinished look.
Posted by Heather James at 11:20 2 comments: 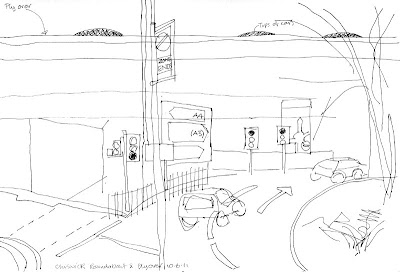 I turned left out of Gunnersbury station and found myself on Chiswick High Road. My only associations with Chiswick is remembering visiting my brother when he lived in a very cold, shared house in the area back in the '70s so this is uncharted territory for me.

I wandered along the road until I reached the Chiswick roundaboat and flyover. Now this I did recognise and decided to record the view because like it or not it is a famous west London landmark. It was tricky to work out how to portray noisy moving traffic that wasn't still long enough to draw. I decided to suggest it with the movement of the lines and one or two vehicles. I also observed that the trees and shrubs growing on the roundabout are really beautiful and that's not something you'd notice when you are just racing round it in a car.
Posted by Heather James at 10:24 2 comments:

Heather James
I'm an artist who lives and works in Hackney, east London. I like to work outdoors, weather and pandemics permitting.

Welcome to my journey

In 2005 I awarded myself a travel bursary. I wanted to explore the North London Line which ran from North Woolwich in the east to Richmond in the west by drawing it. I drew each station as I reached it and six years later, on 1 July 2011, I completed this project. I have published this project as an ebook which is free to download here.